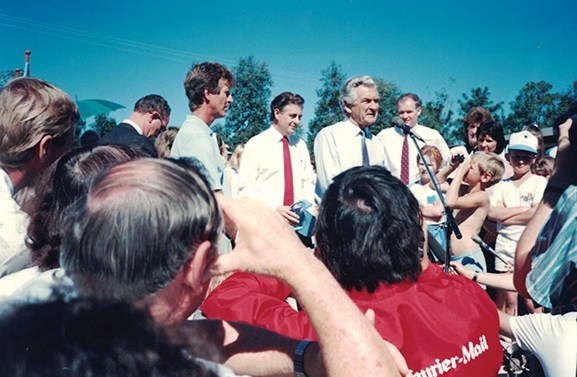 The Day Bob Came to Town by Darryl Sampson

With the passing of former Prime Minister, Bob Hawke, recently, I thought it would be appropriate to get a reflection on the day Bob came to town from Park Ridge Panthers founder, Darryl Sampson.

Park Ridge Baptist Sporting Association was awarded funding through the Federal Government’s Commonwealth Employment Program to employ unemployed workers to build the clubhouse and construct seating around the original Hubner Park fields. Using this grant we bought the materials and employed the labour to complete the project.

Mr David Beddall, Federal Member for Rankin at the time, was a great supporter of our application for the funding and after the project was completed, he was so impressed with what had been achieved, he asked if the PM, Mr Bob Hawke would come and officially open the clubhouse and seating development and he agreed to come – a wonderful day.

The PM told us all that day how impressed he was by the way the community had come together to achieve so much with the funding that had been allocated. The driving force behind the success of the project were the combined efforts of Mr Pat Curtis, Mr Neal Smith and Mr Barry Brook, who enabled this great achievement to take place back in the 1980’s.