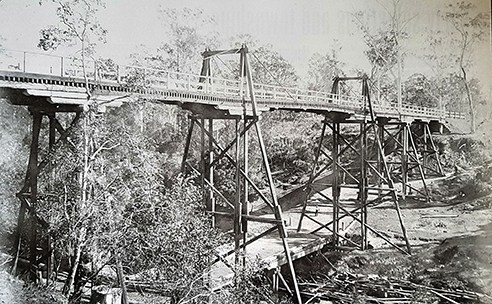 The Logan River was at the intersection of two major language groups, the Yugambeh to the south and the Jaggera to the north. Studies by their modern descendants indicate that there were eight family groups within the Yugambeh. Of these, the one which lived closest to the Park Ridge area was the Gugingin.

John Allen (Bullumm) of the neighbouring Wangerriburra clan said the Gugingin lived along the banks of the Logan River. A map drawn by John Lane shows the Logan tribe (Gugingin) slightly west of the Logan River around the Chambers Flat-Park Ridge area, possibly extending into Greenbank.

The Gugingin were expert makers of nets, using fine cone-shaped nets to trap fish and larger nets 15 metres wide to trap kangaroos. Like other families in the region, they moved throughout their territory according to the season.

Excerpts from Logan: Rich in History Young in Spirit – a Comprehensive History by Robyn Buchanan 1999

1826
On August 21st 1826, Captain Patrick Logan explored the river which today bears his name. At that time the Jagera people occupied the region.

1840s
1841 Trigonometrical Survey of Moreton Bay (Rob Dixon – Assistant Surveyor) included areas along the Logan River through Logan West.
First record of the term ‘Browns Plains’ being used to refer to the area between what is now Park Ridge and Calamvale. Browns Plains was a grazing outpost. Cedar cutters were actively working the Logan West region. Logs were rafted downstream or hauled by bullock teams to rafting grounds where they would be picked up by steamers and taken to sawmills. 1861
The Logan Agricultural Reserve was surveyed by Surveyor, Warner, and named Logan Reserve. The Logan Reserve, in it’s original sense, meant about 500,000 acres reserved for agricultural settlement in 1862 and comprised a large settlement and population on the banks of the Logan River.
The American Civil war led to the rise of a cotton industry in the Logan area, as raw materials were no longer available from America for the cotton gins of England.

1863
The township of Maclean was surveyed.
Casino-Brisbane Mail Coach included a stop in Browns Plains. The Greenbank Hotel (Meadows Rd) and McGoldrick’s Union Hotel in Maclean, were also used as stops to change horses.

1864
By the end of the year, all the land along the river had been taken up. Crops included cotton, potatoes, maize, oats and sugar cane.

1865
Severe drought led the local churches to hold a day of prayer for rain.
Pat McGoldrick licensed to operate the Union Hotel at Maclean. 1866
Jerry’s Downfall is said to have occurred about this time. It is thought that Jerry was a Kanaka working at the Townsvale cotton Plantation (near Veresdale) who capsized a bullock dray of cotton while crossing Chambers Creek (Munruben).

Life and Legacy – There has to be more to life…