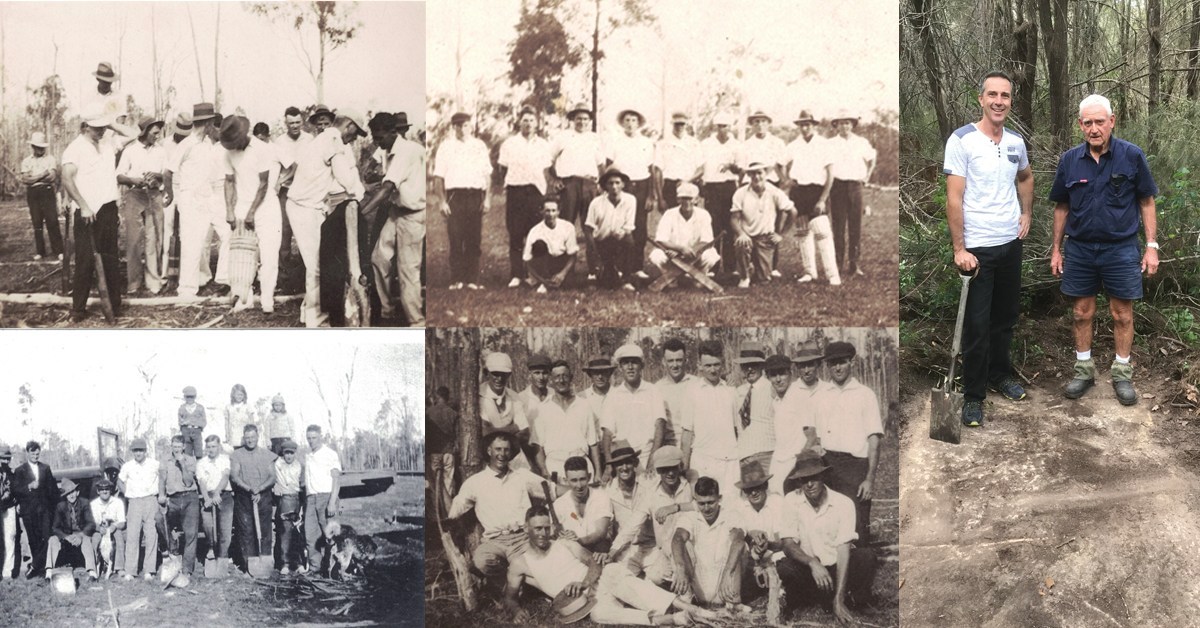 As the Summer of crickets gets underway for another year, the origin of cricket in Park Ridge and its role in the history of those who settled here has taken a surprising twist. Photographs emerged late last year (2017) showing the day a cricket pitch was built by locals in Park Ridge during the 1930s. The photos sparked the interest of volunteers at the Park Ridge Connect Centre who started digging around for the story behind the photos.

In the early 1900’s, enthusiastic young men gathered on the low lying flats of the Smith family property to play cricket against teams from around Brisbane. “Back in those days, you accessed the property directly from Beaudesert Rd, just near Jerry’s Downfall”, Judy Nightingale (nee Smith) said about her childhood home.

At some point around 1933, the men got tired of the cattle leaving hoof prints in the pitch between matches and decided to build a concrete pitch which would be easier to maintain. A working bee was called, supplies were gathered and the team seen in the photograph went to work.

The 1930s team photo included a young JJ Smith pictured laying at the front of the team. JJ Smith would become a popular and influential local representative for the Park Ridge area, which at that time, was part of the Beaudesert Shire. There are several monuments and parks around the area that still bear his name.

The young boy standing on the back of the truck on the day the pitch was built, Keith Smith, would go on to represent Beaudesert and District at Queensland Country Week – a premier Queensland Cricket competition that has been running since 1947. “He proudly displayed his trophy for taking four wickets with consecutive balls, a double hat trick!”, family members recalled.

Lifelong resident of Park Ridge and son of JJ Smith, Peter Smith, remembers playing on the pitch with his mates in the 1950s. He remembers his father regularly spending afternoons down playing cricket. “They used to get home from work early in the afternoon – they were timber cutters – and spend the afternoon playing cricket”, Smith said. “The pitch didn’t get used much in our day after they built one at the school [Park Ridge State School].”

Now accessible off Stoney Camp Rd, the pitch was seen by locals prior to the development of the Mt Lindesay Hwy and Sycamore Reserve in the 2000s. It is clearly visible in aerial photographs taken by state surveyors in the 1960s when the land was still cleared, and again in the 1980s. By the 2000s, the reserve had revegetated and several floods had caused much silting of the land leaving the pitch unidentifiable from the air.

After hearing of its existence, volunteers from Park Ridge Connect began to meet with Peter Smith, researching it’s location and carrying out searches. For several months searchers tried all manner of means to locate the pitch in the thick scrub but would leave the site disappointed. On 6 June 2018, through a combination of technology and good fortune, volunteers found themselves standing on a corner of the pitch. Completely overgrown with lantana and covered by fallen trees and mud, workers began to uncover this lost artefact of Park Ridge’s history. Several coins and other items of historical significance have also been discovered on the site.

Locals are working to have the pitch marked as historically significant to Park Ridge and kept cleared so that it isn’t lost again. “We’re looking at ways we can tell it’s story and make sure its history can be recorded for generations to come”, said one Park Ridge Connect volunteer.

Park Ridge Connect is looking into a list (See below) of other historically significant people, places and events around Park Ridge. If you have information that you think would be helpful in this or you’re interested in volunteering to research and record Park Ridge’s history, you can visit their facebook page www.facebook.com/ParkRidgeConnect/

Are My Trees Dangerous?