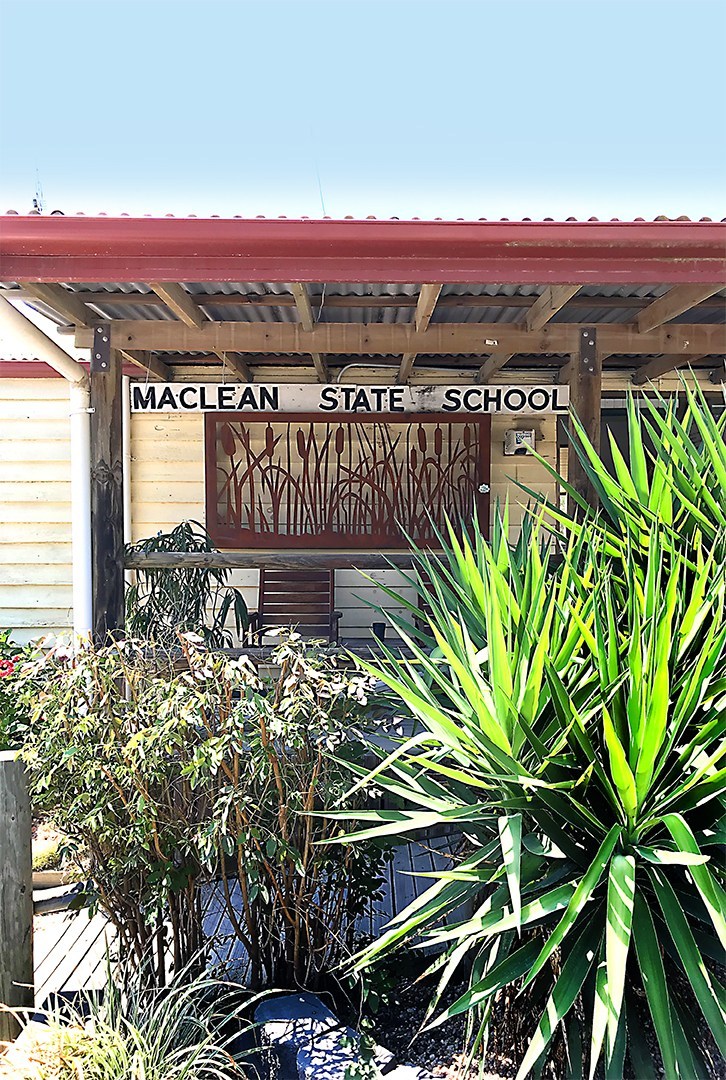 You may know it as the office of Oasis Landscaping and Building Supplies, but the sign over the front door points to a much different story.

The little timber building on the corner of Greenbank Rd and Mt Lindesay Hwy has a long and varied history in the area. As the sign on the verandah points out, it was for some time the Maclean State School. One of the first settlers in Maclean when freehold land was opened up in the early 1870s, was John Edwards. John built and furnished the first North Maclean Provisional School along Teviot Rd in 1882 and was appointed its first Head Teacher.

By 1908, attendance at the school had dropped below the 12 students required for the appointment of a teacher. After some community protest, the school was permitted to continue but by 1910 numbers had fallen further and it was closed on 12 August that year. The school did reopen briefly in 1911 but was closed again within twelve months and the building sold.

Lifelong resident and history buff, Jeanine Herbert, records the opening of the school at it’s current location, “Maclean State School opened on April 16, 1926 with 19 students. It operated in a tent on land adjacent to the school grounds, on the corner of Mt Lindesay Highway and Greenbank Road until the school building was relocated from Cashell Hill, near Rathdowney.”

The little school continued to be the centre of education for generations of children through this period. It was also home to the local Sunday School. A number of former Air Force men, Don Eagle, Maurie Little and Keith Little, and their wives, started a kids club known as the Baptist Flying Squad. They would regularly meet in the little Maclean State School building. The kids club became a Sunday School and started meeting at Park Ridge State School. The Sunday School grew and became the Park Ridge Baptist Church.

The Maclean State School was eventually forced to close in 1963 and the land was eventually sold by the state to private owners. The little building had a short life as an Arts & Crafts centre in the 1970s before a series of landscaping supply businesses made it their home. These have included Maclean Sand & Gravel, Kev’s at Maclean, Nuway and now Oasis Landscaping and Building Supplies and Oasis Nursery.

The staff at Oasis say they still have folks drop in and tell them that they went to school there. Thanks to the stewardship of successive owners, the old school building is still in good condition and this part of Logan West history remains. It might even be worth taking the kids for a look to see what school was like in simpler times.