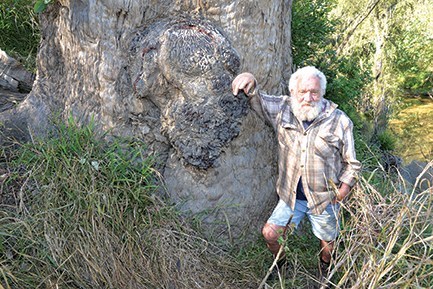 One of the oldest trees in Logan has been officially dated and named ahead of National Tree Day.

The blue gum (Eucalyptus tereticornis) on a North Maclean property is estimated by an expert arborist to be 378 years old. That means it was sprouting it’s first signs of life around 1641 while Rembrandt was painting The Rabbi, Galileo was publishing his ideas of the universe and Abel Tasman was discovering Van Diemen’s Land.

Gandalf’s trunk is 2.38m thick and is estimated to be 34m high although the top has been snapped off, probably in a storm. Landowner John Howes said he was surprised to learn the tree’s age when tested under a program funded by Logan City Council.

“We knew it was old just by looking at it but thought at best it might date back to around the time Captain Cook discovered Australia (1770).”

Testing by the arborist, which confirmed the tree dates to the 1640s, involved using an extremely thin drill probe which measures the resistance as it goes through the hard and soft wood of each year.

The data identifies a yearly growth pattern which enables the age of the tree to be estimated.

The arborist, Adam Tom, suggested giving the tree a name and chose Gandalf after the aged wizard in Lord of the Rings. “We thought it was an appropriate name as the tree has a lot of character,” Mr Howes said.

The tree is located on the bank of a picturesque upper reach of the Logan River.

Like many old eucalypts, Gandalf contains a number of hollows that provide shelter and habitat for native animals including possums, gliders, owls, parrots, ducks, rosellas, kingfishers, frogs and native bees.

Ken Aitken – The Man Behind The Home